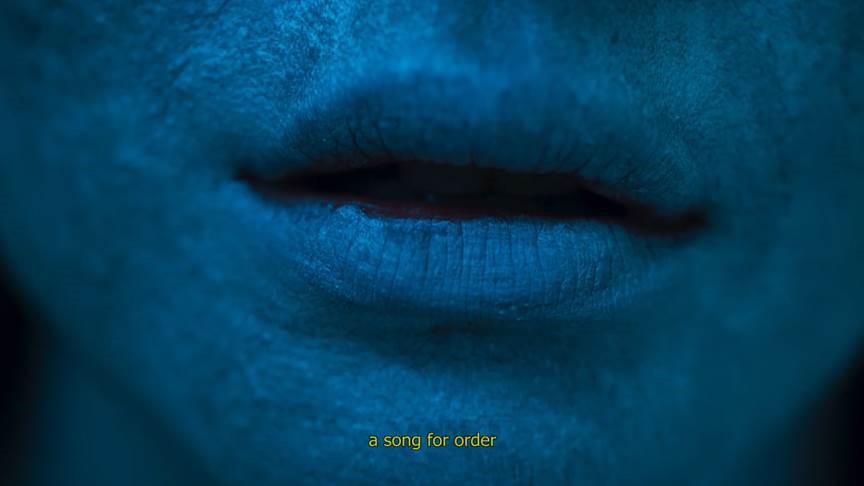 The fourth scene of Fantastic Interior marks the end of a cycle of exhibitions that began a year ago and has run through the different moments that, in some way, construct the intimate story of a life, beginning with childhood and ending with death, and stopping everywhere in between.

In this final scene, Korakrit Arunanondchai (Bangkok, 1986) presents the video installation Songs for dying, in which the Thai artist looks at ways of seeing the world in which the relationship with death has a markedly personal and immediate character and is closely linked to life. In this space, situated between the material and the spiritual, between the here and the hereafter, and in the ways in which this space is narrated, Arunanondchai finds many of the hidden codes that serve to explain the real. He is thus able to create a visual collage in which various events occurring in different places and at different times are linked by a common figure: that of the ghost.

The ghost is represented as an allegory of what cannot be told and draws from Asian spirituality and animist religions. What is important is not whether the ghost exists or not, but the stories and narratives told through its figure, which inhabits the various places that Songs for dying traverses in different ways.

For example, the ghost inhabits collective trauma when the video installation narrates the events of the Jeju Massacre, the rebellion that took place on the island of Jeju (South Korea) on 3 April 1948 against the government of the country, the paramilitary Northwest Youth Group and the US occupation of the island. Some 30,000 civilians were killed by the South Korean army, paramilitary and US forces, and the local authorities forbade anyone to speak or write about what happened for six decades. Given this enforced silence, shamanic rituals and other manifestations of intimate spirituality became the only way for survivors and family members to find peace and reconciliation. The figure of the shaman is central in the video and is represented as a protector of history, capable of becoming the receptacle of this buried and hidden memory.

The ghost also manifests itself in some way through the demonstrations, reproduced in the video, that took place in Thailand following the student protests that fought for a more democratic and prosperous framework for the country. Collective images from popular culture such as the three-fingered salute or the yellow bird from the books of the fictional trilogy The Hunger Games—which symbolise the opposition to the established power—were “performed” in the demonstrations and are captured by the artist in his work. The disconnection between the members of the government and the people (which turns the former into ghosts), combined with the immediacy of the popular culture in which these symbols originated, somehow recodes a new spirituality of which the protest is also a participant, generating a tension between what is material and what pertains to the soul, between the sacred and the secular, between the official and the popular.

The artist’s own relationship with death and the spirituality of the ghost are also conveyed through the passing of his grandfather during the COVID-19 crisis, which is the starting point of the video: the artist shares the precise moment of his grandfather’s departure, in which he is invited to sing the dying man a song that will accompany him until his last moment in the world, since the sense of hearing is the last to disappear when we die. It is these songs, capable of connecting worlds and accompanying the processes of dematerialisation of the human spirit, that structure the narrative of the whole video, becoming chants that invoke the spirituality of the contemporary era, songs for order, songs for decomposition, songs for dreaming . . .

A turtle, embodying the spirit of the artist’s grandfather, narrates this multi-faceted tale alongside the voice of Arunanondchai himself. The relationship between the two narrators creates a story that conjures the eternity of the spiritual and connects it to the fragility of the human, speaking of decomposition as a way of existing in the world that connects us to animals and plants. The sacredness that inhabits the art of storytelling and the political contents that the act of storytelling harbours overflow in Songs for dying, invoking everything that cannot be touched, that which is intimate but at the same time universal and that dies every day to be reborn the next.