May you break free and outlive your enemy 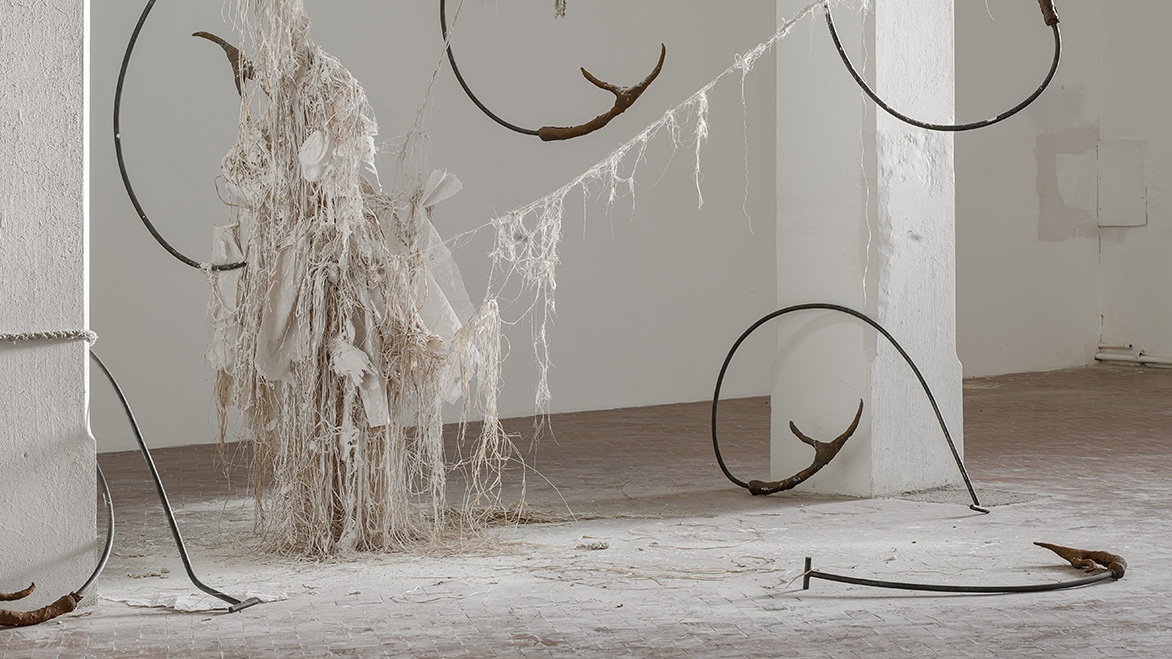 Dominique White is the first invited artist of the annual curatorial project Reclaiming Resilience. This installation is the first of the series based on the myth of the Lernaean Hydra, a many-headed serpentine water monster able to regenerate its heads when they were chopped off that was killed by Hercules.

Upon entering the dimmed room in which Dominique White’s installation May you break free and outlive your enemy is displayed, one instantly becomes a witness. A witness of the scene of a recent battle, so recent in fact that the severed limbs (or heads) of the central structure, the Hydra, seem to still vibrate from the surprise of the brutality of this event, their mouths wide open for attack.

This installation is the first of the series based on the myth of the Lernaean Hydra, a many-headed serpentine water monster able to regenerate its heads when they were chopped off that was killed by Hercules. In their book The Many-Headed Hydra: Sailors, Slaves, Commoners, and the Hidden History of the Revolutionary Atlantic (2000), which is another point of reference for the artist, Marcus Rediker and Peter Linebaugh trace how, from the beginning of the English colonial expansion in the early seventeenth century through the metropolitan industrialization of the early nineteenth century, rulers referred to the Hercules-Hydra myth to describe the difficulty of imposing order on growing global systems of labour. The many-headed hydra was seen as a symbol of disorder and resistance, a threat to the building of state and capitalism. Composed of dispossessed commoners, urban labourers, sailors and African slaves, these many heads of the ‘monster’ developed new forms of cooperation against the rulers, from mutinies and strikes to riots, insurrections and revolution.

In May you break free and outlive your enemy, Dominique White inverts this logic: the state becomes the many-headed monster and blackness its death giver, cutting off channels of its poisonous power. The act of cutting is literal here as the artist slashes, stretches, and rips sail, sisal and raffia while splashing, rubbing and soaking kaolin clay onto their surface. The fragile, suspended pieces that emerge from this laborious process resemble a shipwreck—a recurring central concept for the artist—carrying the idea of the boat as the vessel of Blackness as a fungible good that still remains today. By holding on to this term she seeks to destroy it, to decompose it, like the many heads of the Hydra.

The sea might not be only carrier of death but a space for new horizons, for new empowering mutations and new routes for resistance, for an emergence of something that refuses to be named.

Dominique White (London, 1993) weaves together the theories of Black Subjectivity, Afro-pessimism and Hydrarchy (from below) with the nautical myths of Black Diaspora into a term she defines as the Shipwreck(ed); a reflexive verb and state of being. White’s sculptures, or beacons, prophesy the emergence of the Stateless; «a [Black] future that hasn’t yet happened, but must.» (Campt 2017 in Yussof 2018)

Dominique White lives between Marseille (FR) and Essex (GB) and she works nomadically. Recent exhibitions and presentations include: Afterimage at MAXXI L’Aquila (IT) (2022); Statements at ArtBasel, Basel (CH) (2022); Love at Bold Tendencies, London (GB) (2022); The Cinders of the Wreck at Triangle – Astérides, Marseille (FR) (2022); Hydra Decapita at VEDA, Florence (IT) (2021-2); Techno Worlds at Art Quarter Budapest, commissioned by Goethe-Institut (Travelling) (2021-2025) and Blackness in Democracy’s Graveyard at UKS, Oslo (NO) (2021).

White is a finalist for the Max Mara Art Prize for Women (GB/IT) (2022- 2024) for its 9th edition and CURA magazine has chosen her as one of the most significant artists of the current generation of artists. She was awarded the Roger Pailhas Prize (Art-O-Rama) (FR) in 2019 in conjunction with her solo presentation with VEDA and has received awards from Artangel (UK) and the Henry Moore Foundation (UK) in 2020. White was in residency at Sagrada Mercancía (CL), Triangle France – Astérides (FR) and La Becque (CH) in 2020 and 2021.