Interviews with the Monster 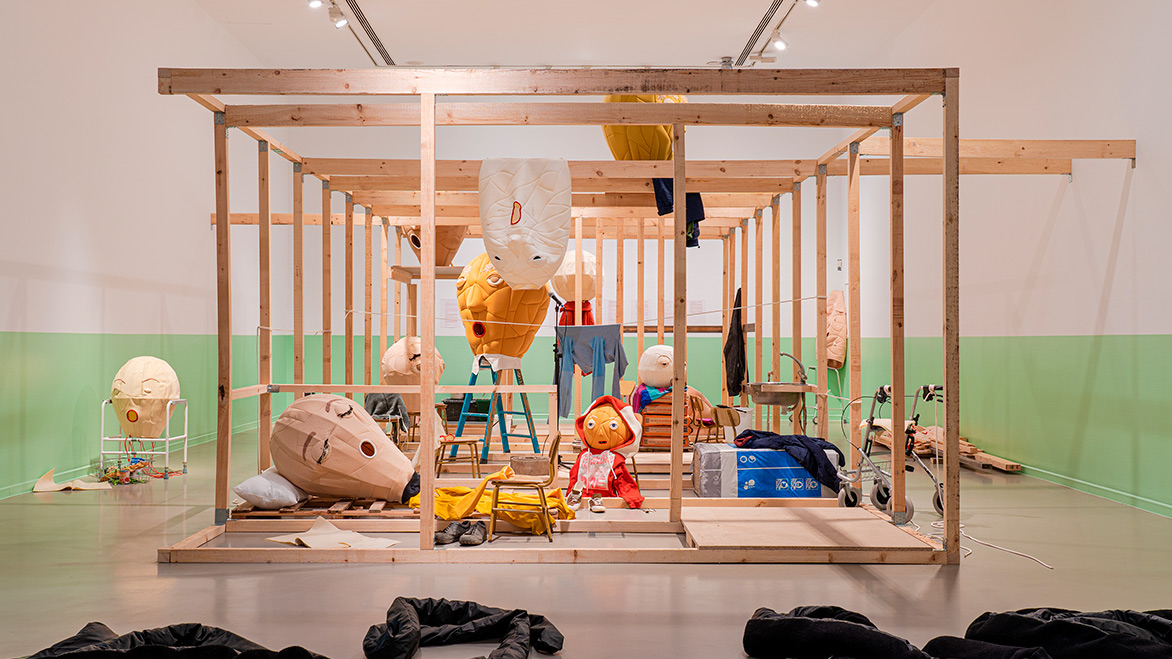 The third scene of Fantastic Interior continues to explore the different sensibilities that traverse the semantics of the intimate. On this occasion—with Interviews with the Monster, by Czech artist Eva Koťátková (Prague, 1982)—we take a look at a more mature present in which coexistence occupies a central place. Empathy and relationships between people are the driving force behind this project, which understands imagination as a tool that not only serves our dreams but also helps us change things by outlining new ways of understanding the other in order to create a limitless us.

Interviews with the Monster is the result of a research project lasting more than two years in which the artist investigated the sheltered housing projects for people with special educational needs that were promoted unsuccessfully in various places in the Czech Republic. In the exhibition space we find what appears to be the construction site of one of these buildings that never went ahead, where we are greeted by a series of characters with giant cloth heads created by the artist. These characters represent real and invented (but possible) participants who, in one way or another, were involved in the construction processes of this space during the artist’s research process: the mayor, the governor, the architect, the president of the petition committee, the director of the NGO that donated these homes for people with disabilities, a woman who supports the inclusion of this collective in her city and a man who aggressively resists the construction of this assisted housing project on a plot of land next to his own.

In the narrative created by the artist in space, the arguments are repeated until, little by little, misunderstandings and the unresolved nature of the conflict come to the surface. Fear of the other makes itself felt and the word “normal” is repeated with increasing frequency; otherness frightens and paralyses. The space under construction is made complete by a large number of useless objects that emphasise the absurdity of the situation. Among them are a series of inert heads that have no role in this story. These plotless heads represent all the potential inhabitants who will probably never live here. No one gave these characters the possibility of expressing their opinions, their needs or their fears—even in this installation, they are mere bystanders.

Normality, discrimination and fear of otherness become present in this exhibition. This blown-up fear is referred to by the artist as “the monster”. The monster is the unconscious panic that seizes us when we look at what is different. Every day, the monster wanders round the city feeding on our learned fears, growing bigger and bigger, preventing us from imagining ourselves as an us, pushing us to be alone . . . In the exhibition room, the monster is represented by a black animal with tentacles that occupies a prominent space in the installation. Far from being frightening, the monster is presented as an affable creature that lets us rest within its soft tentacles. However, the anxiety produced by the monster settles in when we listen to what it has to tell us through a series of audios that tell stories about real people and fictional characters talking about discrimination, bullying and the erasure of skills. Their experiences refer to the behaviour of agencies and institutions, to power and the petty despotim of medical diagnoses, to the problems of the labour market, the exclusion of collectives, public mockery or the (im)possibility of becoming independent.

Interviews with the Monster places us before everyday situations in which encounters with otherness reveal social prejudices and learned mechanisms of exclusion. As the artist states, “Our society is built on inequality and exclusion. From childhood, we are deliberately rooted in fear of what is different or unknown. There is no place for difference, which represents a threat to the system. What is different is often referred to as useless, incomplete or diseased, and is seen as something to be repaired or decommissioned. Imagination is only tolerated as a means to dream, not as a tool for change. We are taught one story while others are silenced, erased.”

This exhibition brings us face to face with our behaviour as a society, questioning the conceptual foundations on which it is based. In this space “under construction” we witness all the obstacles that inhibit our empathy from working and prevent us from imagining in a radical way. In short, those obstacles that prevent us from building a present in which everyone and everything can exist at the same time.

In collaboration with the Czech Embassy on the occasion of the Czech Republic’s Presidency of the Council of the European Union.